BattleTech Posts
Get Emails from Jason

Sometimes the secret to turning out a lot of stories, or finding a way to even just finish the first one, is to use a framework. Something you can take apart and study, and practice until you get it right.

You can build a bookshelf, with a tree and an axe, if you have all the time in the world. It’s a lot easier if you have blueprints, diagrams, and pre-cut wood.

That’s what a story diagram can give you.

Let’s look at the Story Circle.

It works for Rick and Morty, it Will Work For You, Too

Dan Harmon’s Story Circle is an adaptation of Joseph Campbell’s Hero’s Journey, which Campbell called the base structure for every successful story. I’m not going to take the time to explain both of those in detail. That’s what Google is for. Instead, I’m going to go right into showing you how to adapt them for a BattleTech story.

I like the Story Circle for short stories because it focuses both on character and circumstance.

Here are the basic diagrams; you begin at 1, and proceed clockwise. 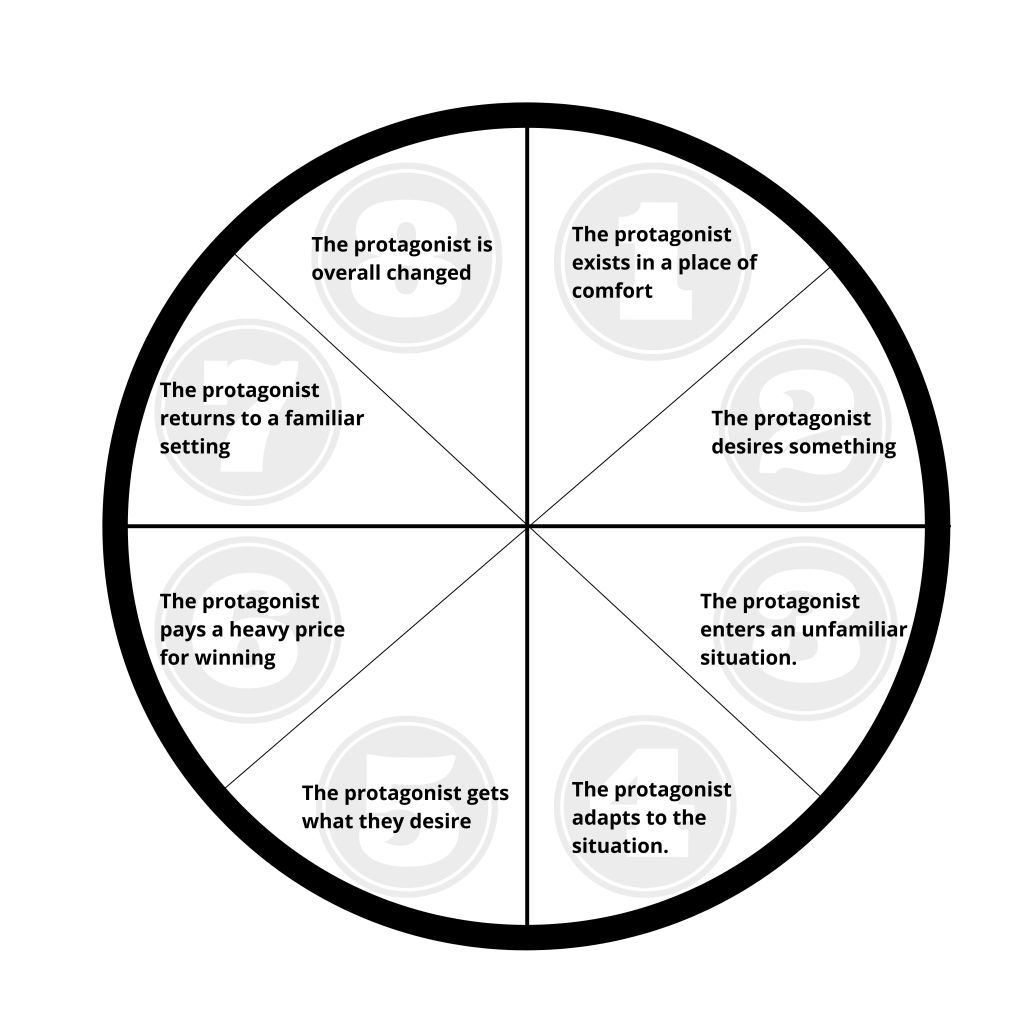 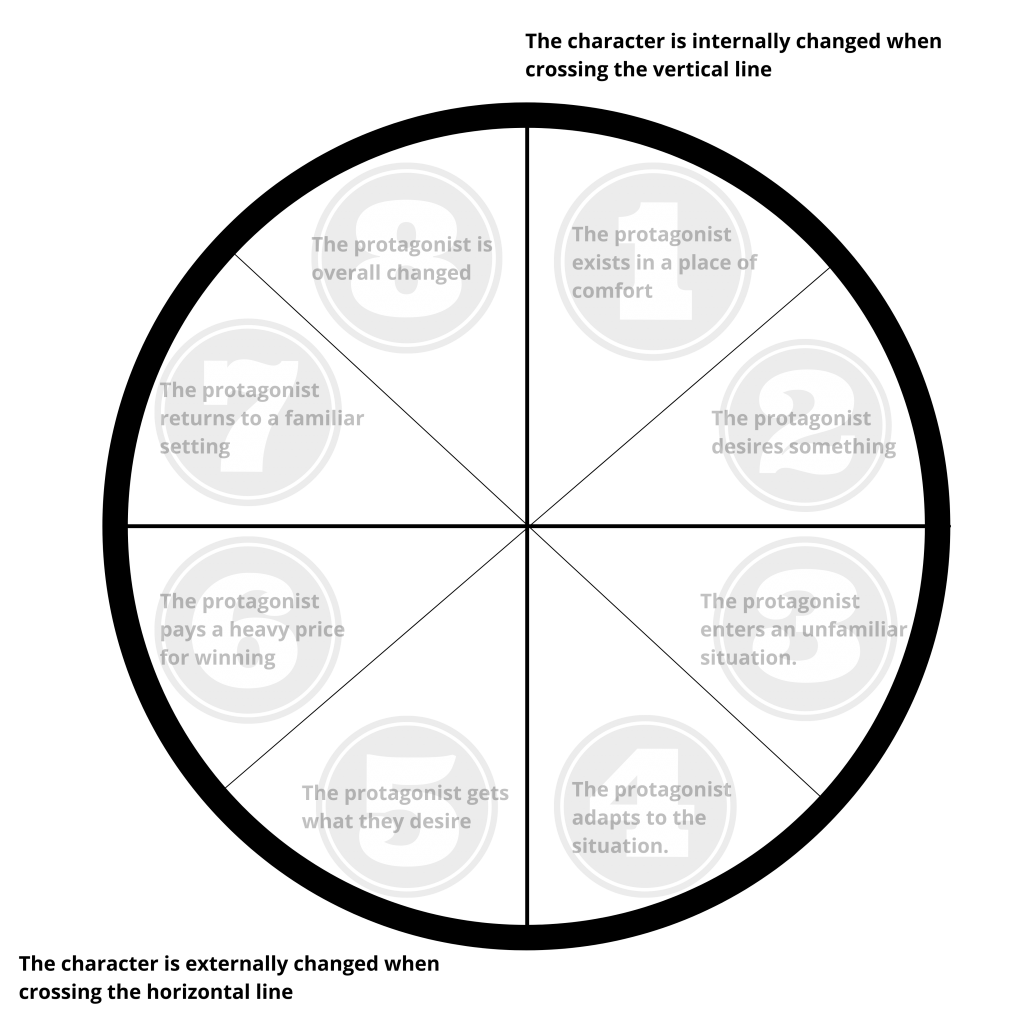 Let’s quickly walk through the eight stages, and look at an example from Lethal Heritage, the first book of the Blood of Kerensky trilogy by Michael A. Stackpole.

The victory comes at great cost, the death of many FC soldiers and the seeming destruction of Kai Allard-Liao’s confidence.

One of the most interesting things about the Story Circle is that it can be applied to almost every viewpoint character in your stories. If we went back to Lethal Heritage, we could do this process for Phelan Kell and Kai Allard-Liao, and it would work.

The characters in all the best BattleTech novels work very close to this model.

Now. How do you use this?

Using the Story Circle for BattleTech

Shrapnel, the only canon source that accepts unsolicited BattleTech manuscripts, accepts stories up to 5,000 words in length. In a standard, double-spaced manuscript format, that’s around 20 pages. Or, if you prefer, about the 22 minutes of a sitcom episode if you were to read it out loud. It also publishes sourcebook fiction, but I think that’s invitation-only.

How to Get Ideas for BattleTech Stories

Do you want a simple, easy way to get ideas you can turn into BattleTech stories for Shrapnel?
Learn How
NEW

That’s not a lot of space. And, at the same time, it’s plenty.

The one common element of all eight slices of the Story Circle pie is a protagonist. Who is our story going to be about?

For this example, we’re going to choose a young officer in the Filtvelt Citizens Militia in 3148 named Leftenant Shadi bin Ismael. Shadi, on her first deployment, commands a short lance of three ’Mechs from her Hound, and her company is on detached duty on Lackland.

Thus, the first stage of the Story Circle—the protagonist exists in a state of comfort—we might open the story with Leftenant bin Ismael’s lance helping to finish construction of a hydroelectric dam in a rural area. The dam will power the nearby town as well as the new mining facility nearby.

Now, Shadi needs to desire something. What if pirates, always endemic to weak the weak Filtvelt Coalition, decide to raid and steal the mining equipment, which is several MiningMechs and other autonomous drilling machines, before the mine can open. Shadi can desire to stop the pirates. She cannot allow them to make off with that equipment.

Third, Shadi needs to enter an unfamiliar situation. A pirate raid certainly qualifies as that. Out in the sticks, with only her lance, and no access to intelligence or order of battle or even the name of the pirate band, there is nothing familiar about it. Also, since this is her first deployment, combat itself is new and unfamiliar. She leads her lance off of the dam, toward the mine.

We have a maximum of 5,000 words, but this much of the story could be told in 500 or less—barely ten percent of maximum word count. We have reserved a lot of words for the action at the heart of our story.

Do not make the mistake of thinking you can just divide 5,000 words by eight and get the right number of words for your time in the Story Circle. Your character needs to go through these stages, but they can get through several in one really good paragraph, if need be.

Entering the fourth slice, the protagonist adapts to the situation, we should see Shadi begin to take charge. She will lead her lance, she will answer their questions, she will act with authority, in short, seem like she’s in charge.

However, now we’re crossing the vertical line into the fifth slice of the Story Circle. The vertical line represents internal change for the protagonist. Something inside of them needs to change, in order to continue the story.

Shadi has followed what she thought she was supposed to do to get this far, but what if she is too late? What if the pirates are already loading the mining equipment, and there are far too many for her three lonely ‘Mechs to face?

Remember the thing that she wanted, to keep the pirates from getting the mining equipment? We’re moving from five into the sixth slice: the protagonist pays a heavy price for winning.

Shadi has gotten her chance to stop the pirates (her desire) but can she make the necessary choice to stop them? Her lance learns the pirates’ route back will take them through the nearby town, where they may attack. They have the mining equipment, but to reach the town, they have to cross the valley below the dam.

To stop them, Shadi must destroy the dam and let the floodwaters crush them.

She must pay a horrible price: the town, already without its mining equipment, is about to lose its power. Shadi must make the decision, enforce the decision, and then carry it out. And to make matters worse, a small force of the pirates has detected them and is giving chase, so there is no time.

By now, we could be a thousand or perhaps 1,500 words into the story, and we’re already three-quarters of the way around the Story Circle. This is where the actiony-center of your BattleTech story comes to the fore—the fighting, the desperate struggle, the final crushing collapse of the dam, the pirates’ destruction. You could spend 2,500-3,000 words on that part of the story.

And, as we cross the horizontal line again, which is the demarcation for external change, headed into Slice 7, Shadi and her lance (or the survivors, depending on how tough you made her penalty for victory) must return to the town. Shadi must return to her familiar setting.

But, rolling right across to Slice 8, Shadi is changed. This morning, she was a young lance commander, using her machines of war to help the townspeople build a better future. But now, coming back to the town, dark in the evening because there’s no electricity, she had paid that price.

And, worse to the last innocent remnants of her morning self, she has come to understand the terrible price victory sometimes costs, but she is a MechWarrior and an officer, and she knows she is now ready and, if necessary, willing to pay that cost again, to secure the victory her duty demands.

Seven and Eight on the Story Circle can be, and often are, one quick scene. The last 500 words or so of the story.

How Do You Use The Story Circle in Your Stories?

The story of Shadi is just one quick example of what you can build from the framework of the Story Circle. Once you understand the function of the wheel, you can quickly plug in details and get a reasonable framework for a story. If you’re a writer who likes to work from outlines, you can easily create one from the Story Circle basics.

Do not get caught up in the literal words in the Story Circle. A protagonist in a zone of comfort does not mean you need to begin with your character in the hot tub, or on vacation, or watching Immortal Warrior HV on the couch; it just means show us what their normal world is so that we (we being readers) understand when that world changes.

“The protagonist desires something” does not mean that every story is a quest story. If you’re writing Goliath Scorpion seeker stories, cool. You can be literal. But everyone else, just understand that “desire” often means “wants to succeed” or “has a duty” or even “is under orders”

Most of these stages boil down to “your protagonist must make a decision and then deal with the consequences.”

I hope you also realized what the Story Circle can’t do for you, which is fill in all the blanks and make the details believable. It can’t give you people’s names, where they live, what they want, who the bad guys are, and all that. It can’t tell you how many rounds a Sternsnacht Python pistol will carry, or what the distance between the jump point and the planet Broken Wheel is.

The details you add, the story you tell, are what make your stories, as derived from the Story Circle, uniquely yours.

Writing BattleTech sourcebook fiction is a finicky business. Much depends on exactly what kind of fiction you’re writing, for which product, and for what intent.

Mike Stackpole invented Galen Cox and wrote him for years, alongside Victor Davion, but I was curious to know what shaped the man who'd one day punch the prince.